Home » News » The Rise of Rashford 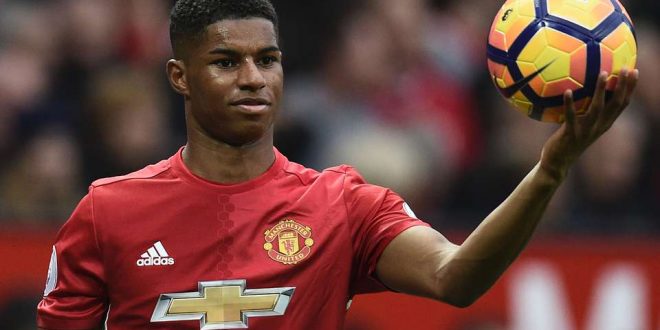 The Rise of Rashford

It is always fantastic to see a young player come through the ranks at a top football club and make their first team debut. However, some make the grade, some don’t, others move to lower league clubs, a few might give up the game all together, but amongst the almost-made-it players, there is that special find. One of those exceptional unique discoveries is Marcus Rashford. The story of this Manchester born youngster is quite extraordinary; records, goals, dazzling debuts, taking everything in his stride and creating his own footballing history, Rashford has already achieved so much in the game and his career has really only just begun. Can he become United’s all-time top scorer? Is he the only player at Old Trafford that has a realistic chance of overhauling Wayne Rooney’s goal scoring record? Does the Ballon d’Or or England greatness beckon for this outstanding talent? Whatever Marcus Rashford goes onto achieve, there is no doubt he has already ‘made-it.’

Rashford made the United first team bench in November 2016 and despite his talents already being recognised, it was a lucky break (even the best need one of those!) that aided the young Mancunian in making his full Old Trafford debut in the team’s first eleven. Louis Van Gaal’s time at United is considered an unsuccessful reign by most, however, if there is one bright and poignant moment in the Dutcman’s stay at the club, it is that of naming Marcus Rashford to play up front after an injury to Anthony Martial in the warm up (an unfortunate moment for the Frenchman but just the stroke of luck Rashford needed to grab his first start for The Red Devils) against Midjylland in the Europa Cup. It turned out to be the perfect start to his Red Devil career, the teenage striker scored two goals, a stunning debut, an evening that would go down in Manchester United history.

Since that special night at Old Trafford for the remarkable Rashford, anyone involved with the beautiful game would know the youngster has gone from strength to strength. Goals, pace, flicks, tricks, this young star has it all, and has created his own records including one which he kept going last week as United returned to the Champion’s league. Scoring on his debut is becoming a habit for Rashford. He netted two goals on his Premier League debut against Arsenal at Old Trafford, in his first starts in the Europa and Champion’s league as already mentioned, league cup first appearance, and, incredibly, to top it all off, he scored on his England under-21 debut and in his first game for the senior team. The only debut he hasn’t scored in is his FA Cup first start – but grabbing a goal in his second appearance in the competition against West Ham is still pretty impressive!

Rashford’s talents are there for all to see, he could go onto be a superstar, world great, yet his feet are still firmly on the ground. He modestly spoke of his Champion’s league bow after the match saying ‘it’s a good feeling to score on my Champion’s League debut, I’m happy with the goal but most of all I’m happy with the three points’ – his own achievements second to team success, Rashford is a down-to-earth Manchester lad who just wants to play football and win. However, whether records are foremost to Marcus or not, there is one piece of history the young United number 19 could realistically and incredibly break if he continues his rise to the top, stays injury free, remains at United, and, most importantly, scores goals – if these four factors are accomplished then there is no reason why Marcus Rashford cannot overhaul Wayne Rooney’s goal scoring record for Manchester United and become Old Trafford’s all-time top scorer. It is a feat any United fan would have thought could never be achieved again, but if Rashford stays with his boyhood club until he is 35 years old, scores on average 16 goals per season, add that to the 19 goals he has in his last two seasons in the first team, and you will have a new Manchester United top goal scorer. There is a long way to go of course, and it may appear an unconvincing prediction, but Rashford seems like the sort of footballer who would stay loyal to the team he has supported as a boy, and if he can continue his incredible form, then why not? Who would have predicted a young Wayne Rooney would have topped the all-time United goal scoring charts all those years ago when he joined The Red Devils…?

Three major trophies already, 78 United appearances and 22 goals so far, 11 England caps, two Three Lion goals and counting, the rise of Marcus Rashford has been remarkable. This young sensational striker has a fantastic football career in front of him and he can easily go onto become one of the best and most historic players for Manchester United and England.