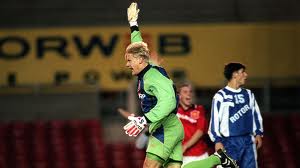 In the last few weeks, football has seen a number of goalkeepers, including Stoke’s Asmir Begovic, score. Footyblog.net takes a look at 5 of the greatest goal scoring goalkeepers.

Penalty’s, free kick’s you name it, this guy was the expert. Arguably the top scoring goal keeper of all time with over 110 competitive goals. The man, who has spent all of his career at Sao Paulo, playing over a thousand games for the Brazilian club, has netted a further 6 in 2013, at the age of 40. Unfortunately, Ceni failed to score for Brazil in his 17 caps but Ceni will probably always be known as the greatest goal scoring goalkeeper of all time.

Paraguayan goalkeeper Chilavert is the top all time international goal scoring ‘keeper with eight goals in his 74 caps for his national side. Chilavert, who retired in 2004, was another goalkeeper known for his set piece ability, especially his free kicks. In total, he netted 68 goals for club and country throughout his career, including 48 in a ten year spell at Vélez Sársfield.

Danish goalkeeper Schmiechel netted eleven goals in his long and illustrious career. Although a lot of these came from the penalty spot in his early career for Danish club Hvidovre, Schmiechel has also scored for his country, Denmark, in a 2-2 friendly draw against Belguim in 2000. He was also known for his presence in the penalty area, especially for Manchester United. He played a hand in that famous comeback in the 1999 Champions League final, winning a header to keep the move alive before Teddy Sheringham stabbed in the equaliser. Schmiechel also got himself on the scoresheet in Europe for United heading United’s equaliser (video) from a corner in a Uefa Cup tie against Rotor Volgograd in 1995. He scored his last goal for Aston Villa in a 3-2 victory against Everton.

The former England international Paul Robinson has two career goals to his name, one in his time at Leeds (video) and one at Spurs. Goalkeepers normally score from one of two ways, from bizarre goal kicks, or from set pieces, Robinson has done both. For Leeds, he scored a dramatic late equaliser against Swindon in the cup to make the scoreline 2-2, with a header that any striker would be proud of.

Everyone has heard of the Jimmy Glass story right? Carlisle United, for whom Glass was on loan at, needed to win on the last day of the season to avoid relegation out of the Football League. Going into stoppage time the score was 1-1 when up stepped Glass to scramble in a late winner from a corner to save Carlisle, sparking a mass pitch invasion and absolutely wild scenes around the ground. Perhaps the most important, most famous goal from a goalkeeper in history.