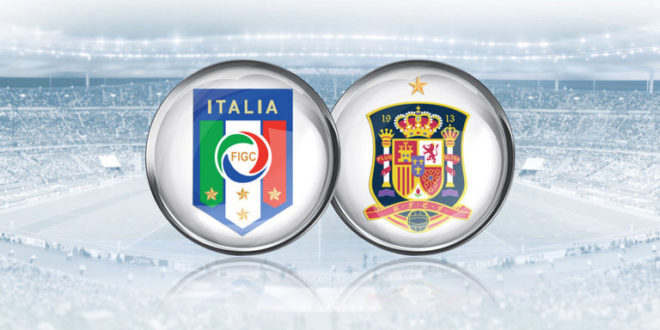 The second installment of my EURO 2016 analysis pieces focuses on a match-up that promised to be an enthralling tactical battle. Conte’s Italy topped Group E with a game in hand whilst a last round loss to Croatia saw Del Bosque’s Spain give up their top spot to finish second in Group D. In fact, both sides lost their final group stage game, with Spain’s loss the more disappointing for them as they only needed one point to guarantee a first place finish. This was a repeat of the final in 2012, where Spain ran out convincing 4-0 winners.

Spain named an unchanged line-up from the side that lost 2-1 to Croatia, while Antonio Conte chose from some more familiar names compared to selection in the 1-0 loss to Ireland. Italy made a total of six changes for this game. I will discuss why this is important later. 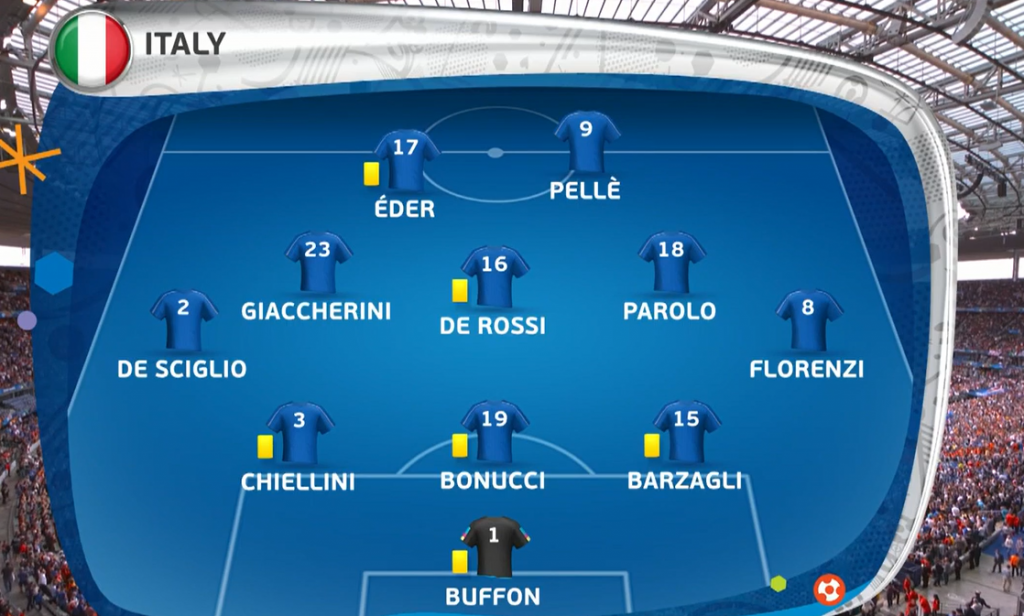 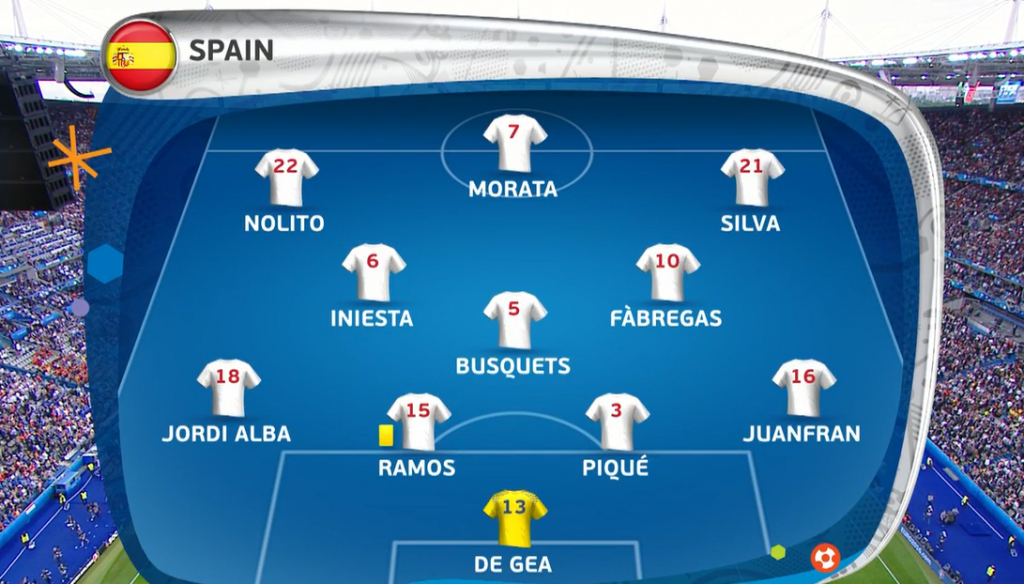 Spain, as expected, controlled possession in the early proceedings but offered no penetration. Italy completely congested central areas, leaving no easy options for Spain through the middle and forced them to play balls out wide. If Spain played direct to Morata, he was outnumbered 3 to 1 by the Italian centre backs.

A common theme when Spain tried to pass from the back, Italy pressing them high and preventing the likes of Busquets and Iniesta to dictate the tempo from deep, forcing low percentage long passes.

Italy’s strength in central numbers paid dividends in attacking transitions also, as here we see the numbers they would commit forward in the space behind the Spanish midfield. De Rossi distributes as Giaccherini, Parolo and De Sciglio join the two strikers.

At 23:46, Bonucci intercepts Iniesta’s pass and starts a counter attack. There are 8 Italian outfield players behind the ball here. 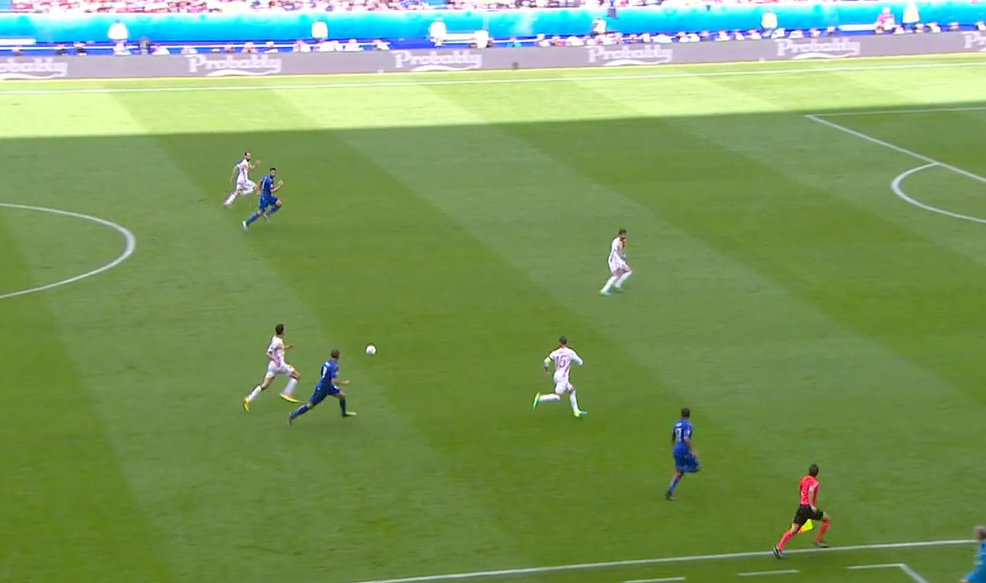 Ten seconds later and Bonucci continues a strong run down the flank and plays central for Pelle. Currently 4 vs 3 in favour of Spain. 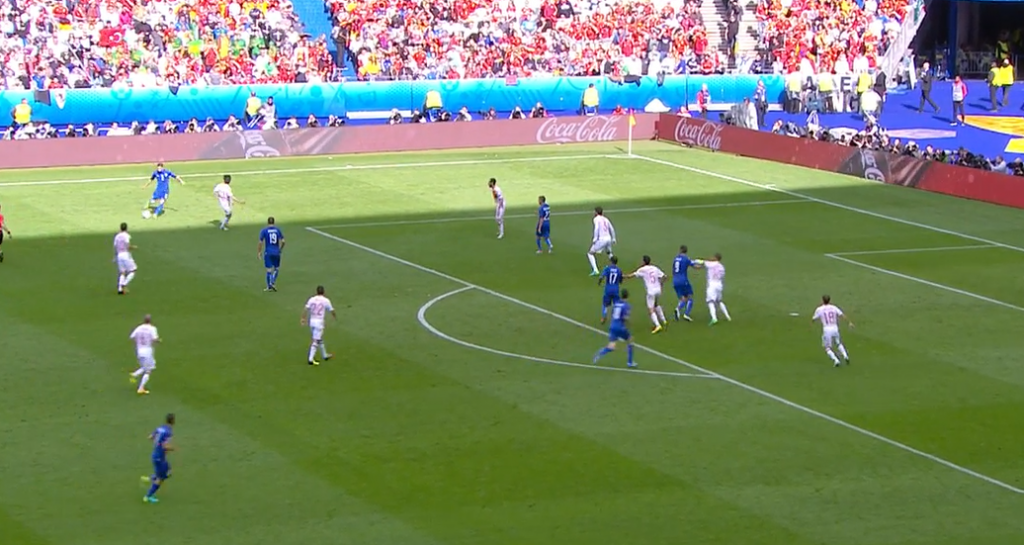 Roughly 20 seconds from Bonucci’s interception and De Sciglio is putting a ball into the box, where 4 Italian players offer a target, De Rossi just out of picture and Bonucci just outside the area. Only Busquets has dropped into the area to help his defence and Parolo (edge of the box here) makes a run from deep and heads wide.

The importance of Pelle to this setup was made obvious on a number of occasions, mostly due to how Italy could alternate between short and long passing due to the option he presented. The threat he offered not only from crosses but from direct balls played from deep to him, which he could either pin his centre half back and control or win flick ons and knock downs for the likes of Eder to run off him proved a big problem for Spain. Spanish acknowledgement of this came through Ramos’ reckless foul on Pelle in the lead up to the opening goal.

Spain played David Silva and Nolito, two attacking midfielders, in wide starting positions. This meant the majority of width was to be provided by Jordi Alba and Juanfran. Italy’s congestion in midfield forced Spain to pass wide often, however Conte’s demand of his wingbacks to press high meant there was rarely an easy pass to be made to the fullbacks. The work rate of Italy’s wing backs was impressive, so often you could see De Sciglio and Florenzi defending in a back 5 shape and then quickly in the attacking half offering a passing option or whipping balls into the box. Morata, in particular, suffered from this lack of width. With no one out wide to stretch the five in defence he was left isolated and proved ineffectual.

Spain’s system remained unchanged following the break, however it was Nolito who was withdrawn in favour of Aduriz, forcing Morata to play out on the left. Spain were noticeably more willing to send crosses into the box following the Athletic Bilbao man’s introduction, Morata missing a guilt-edge chance from a cross some three minutes into the half. Unfortunately for Aduriz, he suffered an injury in the 57th minute attempting a header, ultimately responsible for his early substitution for Pedro in the 81st minute.

Spain’s midfield offered next to nothing defensively when Italy were in possession and they were lucky not to be two or three goals down some fifteen minutes into the second half.

Following an attempted through ball for Aduriz, Buffon claims and distributes to the recently introduced Thiago Motta, who came on for Daniele De Rossi.

When Motta finds Florenzi, he is closed down by Jordi Alba. Florenzi plays first time for Parolo with time and space to pick out a pass. Notice Sergio Busquets, running from the centre circle, miles away from the danger. There are only three Spanish defenders in their own half, where Pelle and Eder wait. Meanwhile, Giaccherini charges towards the box completely unmarked (standing in the centre circle here) now that Busquets has shifted across, but it all starts with Spanish midfielder’s poor positioning and lack of desire to help defensively.

A first time pass from Parolo finds Pelle, who links with Eder and puts him in a one-on-one dual with De Gea, the latter coming out on top. Italy’s ruthlessness almost at its best here, so close to punishing Spain’s high line and sloppy team shape with a glorious counter attacking chance.

The six changes made from the Ireland game plays a huge role in Conte’s system due to the constant high pressure and intense style of play. Italy were clocked at running almost a collective 120 kilometres in their first group game against Belgium (a tournament high throughout the group stages), then 113 against Sweden and, most interestingly, 104 kilometres in the last group game against Ireland where they had already qualified.

Conte’s men were well rested and ready for the task; Buffon the hero when only one solitary mistake made by Barzagli almost allowed for Pique to equalize from five yards out. Spain started sending more numbers forward and were out at sea when Italy countered them from a corner. In transition, Pedro filled a gap left by Pique at centre back and was marking Graziano Pelle before he wrapped up the contest.

A very enjoyable game to watch with the spoils going to the tactically adept, intense and hardworking Italians. Not the best performance from Spain and although they did create some chances, they were nowhere near organized enough to deal with the lightning quick counter attacks and numbers Italy sent forward in transition. An interesting note is how this Italian side would function without Graziano Pelle. I believe his importance to the functioning of this system cannot be stated enough; the options he gives his side makes them chameleon-like in their ability to adapt in accordance with their opponent’s strengths and weaknesses. Either way, Italy are a well-drilled unit under Antonio Conte and they now play against a formidable German outfit in the quarter-finals. 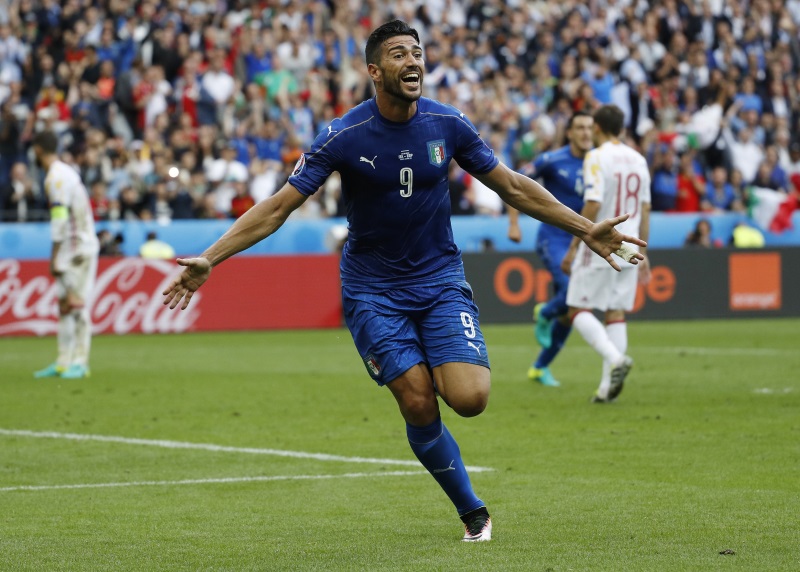