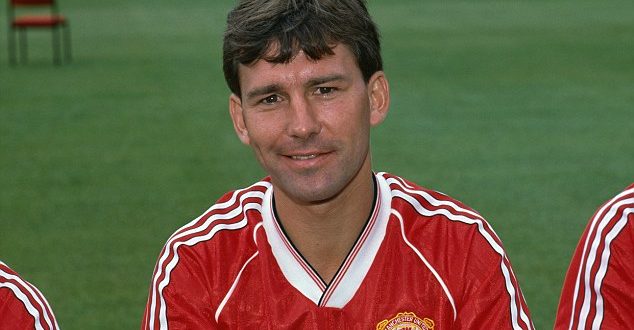 It is 25 years since Bryan Robson signed for Manchester United for £1.5 million pounds, at the time, it was a British record transfer fee. This once tough tackling, warrior-like midfielder is to date the longest serving captain Manchester United have ever had and he scored 99 goals for The Red Devils in all competitions. From FA Cup winner to wearing the famous number 7 shirt, there are many reasons why Old Trafford’s ‘Captain Marvel’, otherwise known as ‘Robbo’, will always be regarded as one of United’s greats.

Bryan Robson famously signed his Manchester United contract on the Old Trafford pitch on 3rd October 1981 in front of a packed home crowd. Under the watchful eye of then manager Ron Atkinson, the midfielder put pen to paper then watched his new team win against Wolves. Five days later Robson made his United debut in the league cup, a defeat to Spurs, he scored his first United goal against Sunderland on 7th November 1981 in a 5-1 away win.

Installed as Manchester United’s captain, Robson lifted his first trophy as the skipper in the 1983 FA cup final against Brighton. He scored two goals in the replay, which ended 4-0, giving The Red Devils their 5th FA cup in the club’s history.

Renowned for his fearless and inspiring play, Robson put both skills into practice in what some would say was his best game for Manchester United in 1984. 2-0 down from the first leg of their European Cup-winners’ cup match against Barcelona, it would seem United didn’t stand a chance of progressing in the competition. Having to overturn the deficit at Old Trafford, Bryan Robson scored twice in a match he described as a ‘never-to-be-forgotten night at Old Trafford’. The team won 3-0, 3-2 on aggregate, beating Barcelona and Diego Maradona in a win inspired by Robson’s drive from midfield.

Sir Alex Ferguson became Robson’s manager in 1986 and the quest for Manchester United’s first league title, since Sir Matt Busby’s reign, was well and truly on. The midfielder won the FA Cup in 1990 and the European Cup-winners’ cup in 1991 under Sir Alex Ferguson, and in 1993 the 26 year wait for a league title was finally over. Although Robson was 36 years old and his appearances for Manchester United were limited by this stage, he still played a vital part when called upon, during the 1992/93 season, in which the team won the first ever Premier League trophy. Battling for every ball, giving his all for the team even when injured, led to Sir Alex Ferguson saying he was the ‘miracle of commitment’.

Bryan Robson lifted the Premier League trophy with Steve Bruce, who had captained United when ‘Robbo’ had been absent, after a 3-1 win against Blackburn at Old Trafford. 6 days later he scored on the final day of the season away to Wimbledon, Manchester United’s last goal of the campaign.

After making 461 appearances for Manchester United, Bryan Robson left the club in 1994. He was the driving force behind so many great United performances and he won 11 honours during his 13 year stay at the club. Accurate passing, extortionary stamina, pace and the scorer of great goals, Bryan Robson was an exceptional complete player which is why he will go down as one of the greatest footballers to have played for Manchester United.