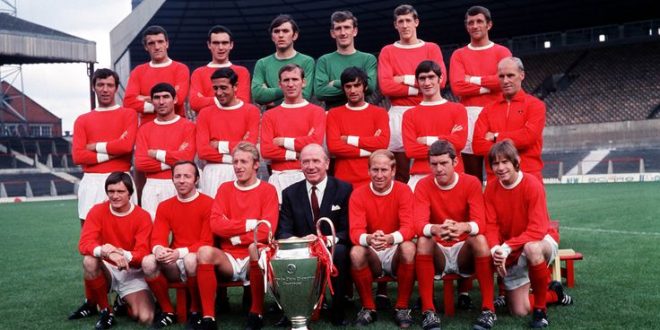 This weekend marks a significant anniversary in Manchester United’s history. It is 50 years since Sir Matt Busby and his re-built team, after the Munich air disaster, became the first English club to win the European Cup, now known as the Champion’s league.

The victory ran deeper than the club becoming champions of Europe; ten years since the Munich air disaster in which eight players and three backroom staff at the club died, Busby surviving and returning to manage the team to the triumph, and, it being the first European cup in the club’s history. Momentous, poignant, and fitting, that the win would be dedicated to all that perished in Germany.

Having defeated Real Madrid in the semi-final, Wembley beckoned for Sir Matt Busby’s men, with Benfica standing in their way of European glory. Wearing their away kit of blue, the team line-up had Stepney in goal, Brennan, Foulkes (Munich survivor), Sadler and Dunne making up the back four; Crerand, Charlton (Munich survivor), Stiles were in midfield; the front three being Aston, Best and Kidd. Both teams played a 4-3-3 formation, Benfica’s star striker and danger to United was Eusebio, a great player at the time in world football, while teenager and unfamiliar name to most, Brian Kidd, got the nod in attack for United. Ironically it would be Busby’s ‘kid’ Kidd who would hold his nerve and become victorious over legend of the game Eusebio…

A 53rd minute goal from Bobby Charlton had given United the lead, but a Jaime Graca shot eleven minutes from full-time made it 1-1. It stayed that way until the 90th minute taking the game into extra time. Rallying his team, Busby gave a brief full-time team talk as his men took a break and breather ready for the next half an hour of extra time. Whatever the manager said, along with the pause in play, must have worked because it only took two minutes for United to regain the lead. An assist by youngster Kidd, a header on after a kick down field by Stepney, was picked up by George Best who took the ball perfectly around the Benfica goalkeeper to then slot the ball into the net. 2-1, Busby’s dream was a step closer.

A minute later it was the teenagers, Brian Kidd, moment on one of the biggest stages in football. With all the big name players and class on the pitch, it was the youngster, but much deserved after such a mature performance, that headed in United’s third goal. 3-1, the cup was edging nearer to being draped in red.

‘They’re running riot now!’ was the cry from the commentator as Bobby Charlton scored a fourth goal. Benfica looked down and out as the chant from the terraces was ‘Busby, Busby, Busby!’ Balloons drifted into the night sky and some of the crowd were on the pitch as the second half of extra time was drawing to a close.

The final whistle blew seconds later to jubilant scenes and of course Busby embracing his players on the pitch – 10 years after nearly losing his life and the devastating loss of some of the Busby Babes in Munich, he went straight to his captain, crash survivor, and true United legend, Bobby Charlton, the pair had achieved their dream and they had done it for those colleagues and friends that sadly were no longer with them. Charlton said it was ‘the pinnacle of Busby’s football life,’ it had been all he had dreamed of as manager of Manchester United but he would never forget his boys who had died in trying to become European Champions – this was for them, and after Charlton had climbed the Wembley steps and held the great trophy aloft, Busby proudly paraded the cup.

‘The ecstasy was incredible at the final whistle’ were the words of Paddy Crerand, he was part of Busby’s rebuilding of the team after Munich, despite joining United after this tragic event, the midfield dynamo understood what the trophy meant to his manager as did man-of-the-match John Ashton who was the first player at full-time to congratulate Sir Matt.

Aside from the tributes paid to Munich and Sir Matt Busby, one other accolade had to be given to United top scorer Denis Law. He was a significant absentee from the line up at Wembley having injured his knee, a major misfortune for Law who deserved to play in a European cup final and pick up his medal, and it was bad news for United to lose their star man. However, Law’s goals and play in the matches building up to the final more than merited him being crowned a European champion, and with super strikes from Charlton, Kidd and Best in the final, it showed no player is indispensable and they could still win even without the main man up front. Law, recovering from his injury in hospital, watched the match on television from his ward bed with the rest of the clinical staff – a very different way to become a Euro winner!

United and the famous trophy flew back to England and landed to a magnificent reception, the new European champions had arrived home. A decade after Munich, the dream had been achieved. Ironically, after getting his hands on the one cup he had always wanted to win, it turned out that it would be Busby’s last trophy he would manage United to before retiring.

After Sir Matt Busby, it would be another Scots turn to make winning the European cup his mission. Thirty one years after that wonderful night at Wembley, United and Sir Alex Ferguson would lift the great cup in 1999, then nine years later in 2008. One would hope Sir Matt had been looking down on his club on both occasions and be proud to know that 50 years after his European win, Manchester United’s goal and dreams still, and always will, lye, like his, in Europe and winning domestic football’s greatest trophy.