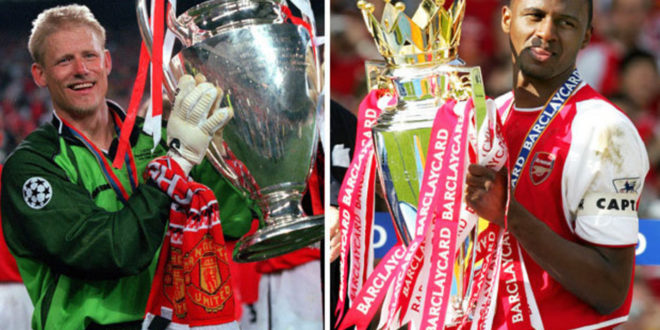 The big money moves and star name signings are always the most exciting and anticipated during the football transfer window. The mega-million pound transfers are top of the gossip columns and the star player signings permanently hog the newspaper back-pages, but however good or bad one of these top transfers turns out to be, there have been many unfamiliar and low-cost names over the years who have raised eyebrows with unconventional and unexpected transfers to the Premier League. Without star-status glitz or the multi-million-pound price tag, the top five players below are the unknown names to have joined England’s top division and become some of the best players in the league if not world football…

Before coming to the Premier League, this overnight sensation was playing in the second tier of French football and, despite being monitored by Leicester City scouts, was a relatively unknown name in the game. In January 2014 Mahrez made the move to England in a €450,000 deal. The transfer fee was small change in today’s current transfer market, however, in signing this Algerian winger, little did The Foxes know they had pulled off one of the best deals in Premier League history. After helping save Leicester City from relegation during the 2014/15 season, the club’s incredible title winning 2015/16 season saw Mahrez go from an unfamiliar name to the footballer on everyone’s lips and on every club’s radar. Making 37 appearances and scoring 17 goals, Mahrez’s all round play was astounding, add to this his ten assists and you have a Premier League title winner, PFA Players and fan’s 2016 player of the year and an unheard-of player who is now a star sensation.

After chasing Alan Shearer’s signature during the 1996 summer transfer window then missing out on the Geordie striker, United fans would have been forgiven for being disappointed when the low profile signing of Ole Gunnar Solskjaer was announced instead of the England front man. He’d done well in his native country, scoring plenty of goals for his club Molde, but he came to England as an unidentified footballer in a £1.5million move. However, scoring on his Old Trafford debut, the Norwegian grabbed the headlines and didn’t look back. 18 goals in his first season with The Red Devils, he was a striking sensation. In the space of three years Solskjaer went from an unknown footballer with minnows Molde to scoring the winning goal in the Champion’s League final with Manchester United. Quite a turnaround, and it wasn’t to end there. The ‘baby-faced assassin’ spent eleven incredible goal-scoring years with The Red Devils proving that if you have the talent then you really can make it to the top.

It was a fairly low-profile signing, or so the football world thought, when Patrick Vieira joined Arsenal in 1996 from AC Milan for £3.5million. An unrecognised player when he became a Premier League footballer, the Frenchman would go onto be one of the most prolific midfield players for Arsenal and play a significant part in the most successful era in the club’s history. Having played mainly in the reserves for Milan, this Arsenal signing went through relatively unnoticed but by the end of his nine year stay with The Gunners Vieira was one of the biggest and hottest names in Europe if not the world. 279 Arsenal appearances, 29 goals and numerous man-of-the-match midfield displays, Patrick Vieira’s Gunner’s move was the making of him and turned him into a household name as well as a fantastic footballer.

Just your average low-profile signing most would have thought when this player moved from little French side Caen in 2015. The £5.6millon transfer fee The Foxes paid wasn’t a snip for a club on a budget, however, they must have seen something special when scouting the Frenchman as that price tag did turn out to be a bargain for this unknown player. Leicester would sell Kante for more than five times that amount to Chelsea after the central midfielder had an exceptional season which resulted in him and Leicester winning an unprecedented Premier League title. Kante’s move to England’s top league went pretty much unnoticed but this once unknown player rarely goes unnoticed nowadays. His power, tackles and ball-winning skills have turned Kante into one of the best players in the Premier League and he has won two titles in two years with two different clubs. This once unfamiliar name has come a long way, and is now an established footballer that would be the first name on the team sheet for any top club.

This unknown Dane moved to the Premier League for a mere £550,000 which would prove to be one of football’s best bargains. In 1991, he was a low-profile name in a low-profile league in Denmark, but within the space of a season, he became one of the biggest names in Europe. This outstanding goalkeeper developed into a feared and unbelievable shot-stopper, in his eight years at United his presence between the sticks would prove to be invaluable to the Old Trafford club; from the minnow days of club football with Gladsaxe-Hero, Hvidovre and Brondby, the Great Dane thrived on the big stage. He was integral in every trophy he and The Red Devils won in his time at the club which included every domestic cup in English football: five Premier League titles, a league cup and a trio of FA Cup victories. In the Dane’s farewell season, he fittingly won the treble and the trophy he’d been chasing with United since joining the club, the 1999 Champion’s league, and much deserved for a player who went from an unknown cheap buy to one of the greatest goalkeepers in football history.

Many players come to the Premier League, some make the grade, some do not, but you would have to agree that very few people would have given the above players much of a chance of working their way into the ‘making the grade’ category. You would be hard pushed to find any fans of the beautiful game who would have thought these players could hold down a first team place let alone go onto become world-class footballers. It just goes to show that an unknown name really can turn out to be one of the best in the game.