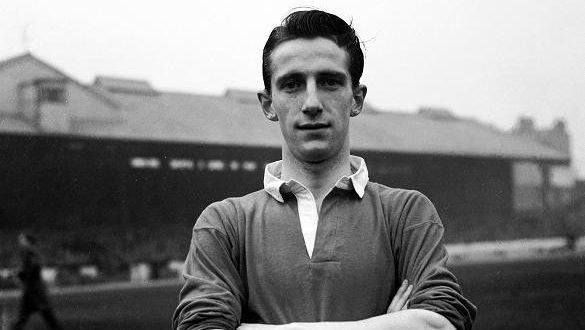 It is 55 years since Dennis Viollet’s illustrious 13 year stay at Manchester United came to an end. The Red Devils were the team that nurtured Viollet through the youth team and into the first eleven where he became one the greatest footballers of his generation and finest goal scorers to have played for United. In name, he was Viollet, but he turned out to be a true great red, with a tinge of blue…

Born on the 20th September 1933, Viollet joined United at the age of 16, playing in the club’s youth team, he became part of the famous ‘Busby Babes’ group and moved through the ranks to become a first team regular. The Moss-side born player made his Manchester United first team debut on the 11th April 1953 against Newcastle away, it was the start of a magnificent and remarkable football career with The Red Devils in which Viollet would go onto score 179 goals in 293 appearances.

Strikers do not come much better than Viollet, his record of 32 league goals in the 1959/60 season has never been beaten by any United player to date. He played a pivotal part in both his and United’s 1955/56 and 1956/57 First Division titles, the front man scored 36 goals in 61 appearances over the two seasons.

Both Viollet and the Busby Babes were double league champions, and the young Manchester born striker was playing the football of his life – all of this on the back of being a Man City fan! He was brought up as a ‘blue’ in a household that all supported City, and it was always presumed Viollet would join The Sky Blue club after leaving school. However, impressed with Sir Matt Busby’s development of young players and the youth set-up at Old Trafford, Viollet wanted to become a red knowing the Scottish manager would have a great impact on his football career, and the Moss-side lad couldn’t have been more right.
But on the back of competing in his first European Cup run, after the 1956 league title win, and becoming the competitions top scorer that season, tragedy struck which would haunt Viollet for the rest of his life.

The Munich air disaster, February 1958, saw eight of his team mates, the players Viollet referred to as ‘Brothers’ killed, as well as three club officials. Escaping with head injuries, Viollet survived but, as described by his daughter in an interview in 2015, the United front man ‘never took a single day for granted after the tragedy’ and ‘it stayed with him his entire life.’

Due to his injuries obtained in the plane crash, Viollet’s season was all but over, he only managed one match, the FA Cup final which United lost to Bolton 2-0. The Red Devil’s top striker looked jaded and half the player he was before the disaster, not surprising considering he was involved in such a terrible accident, however, being the great footballer he was, Viollet came back stronger and fitter for the start of the 1958/59 season. He scored 21 goals in the league which helped Manchester United finish second in the First Division.

The following season saw Viollet score his record breaking total as already mentioned – 32 goals in 36 First Division matches. He would play for United for two more seasons after creating this goal scoring piece of history, finding the back of the net 23 more times during this time.

Leaving for Stoke City at the age of 28 in 1962, The Potters paying United £25,000 for his services, Viollet carried on being the goal scoring machine which had made him such an incredible and loved striker at Old Trafford, netting 66 goals in his three year stay at Stoke.

After his spell with The Potters, Viollet played in America and Northern Ireland then coached at Preston and Crewe. In 1974 an opportunity to manage in America saw the former striker move back to The States where he stayed until he sadly passed away at the age of 65 in 1999 from a brain tumour.

Dennis Viollet’s former team-mate John Doherty said the striker ‘would always be in my best all-time United team.’ It is a compliment that sums up what a great player and fantastic goal scorer Viollet was for the Old Trafford club.

Quick paced, great intelligence of the game, excellent positioning, and deadly in front of goal, Viollet turned into a red in 1949 and went on to become one of the best and most legendary strikers to have ever played for Manchester United.