To me, if I was asked whom was my favourite footballer ever to watch, the most talented player whom brought the most personal enjoyment to see, I would have to say Zinedine Zidane. I wasn’t around when Pele was playing, and from what I’ve seen of him in grainy-footage from Brazilian leagues of previous decades, he too must have been immensely enjoyable to watch but in a completely different way. Pele was a goal machine, he simply scored goal after goal. To me he would have been a special player to watch, but despite not being born until he had long since retired I was brought up watching the likes of Alan Shearer, Eric Cantona and of course Zinedine Zidane. Recently Pele himself said that he feels Zidane is better than Lionel Messi, a statement that I agree with although which I feel is like comparing apples to oranges – they’re two completely different players.

Then there’s Diego Maradona, another legendary footballer from South America. He was another special player, who would have put anyone in a trance in the peak of his playing days. He would have been a player who’d have given me immense pleasure to watch as well, but yet I don’t feel the same kind of bond that I do with Zidane, simply because I wasn’t growing up watching him play. From the countless Maradona and Pele documentaries that exist, to this day I’m surprised that, at least to my knowledge, there doesn’t seem to be any decent Zidane documentaries around.

So when I heard about the “documentary” Zidane: A 21st Century Portrait, I was intrigued. Here was a documentary which apparently features 90 minutes of Zizou, during a Real Madrid game versus Villareal at the Bernabeu. I first watched it when it was broadcast on BBC Three, but thankfully now it is also possible to watch Zidane: A 21st Century Portrait Online on YouTube. 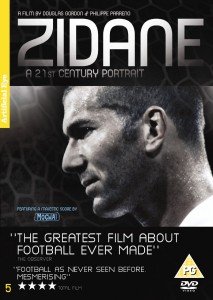 I won’t give too much of the 21st Century Portrait away, but if you are like me, and you feel privileged to watch any kind of footage of Zizou, then you’re going to love this. It’s set with a moody backdrop, the atmosphere and ambience of the documentary is set perfectly, largely thanks to the mesmerising soundtrack provided by moody, progressive rock specialists Mogwai. The game isn’t exactly the best spectacle, but if you’re looking for fast paced entertainment then this isn’t really for you. The Zidane film is one to watch when you’re in bed, in the evening, and want something soothing and calming to enjoy. It really is an incredibly watchable 91 minutes, despite not a lot taking place. And for those of you who have never been able to enjoy watching Zidane live, this is like your very own personal player cam, fixated on the brooding French artist for the full length of the game.

The video below is apparently for a German version of the Zinedine Zidane: A 21st Century Portait film, but subtitles are in English (and there isn’t exactly much dialogue anyway) so this is as good as any other versions! Enjoy!