Home » News » Why are Transfer Rumours Always so Unreliable 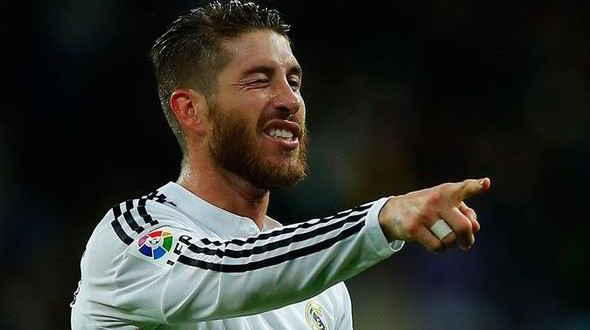 Why are Transfer Rumours Always so Unreliable

We live in an age where information is so easily broadcast and available, practically anyone can claim to be a reputable source, and when it comes to football and the world of transfer rumours, it really is a mindfield of dodgy stories and agenda-driven propaganda.

Fortunately there are some reliable sources of football transfer news, such as www.transferrumours.co.uk. Here you can find all of the major football leagues covered, and can search and filter data in a clear and simple manner.

This kind of resource is great at a time when even the supposedly authoritative, unaligned group the BBC start to post all sorts of transfer stories on their BBC Football website. The site used to be a great resource for genuine football news and insightful articles, but now has begun pandering to all sorts of stories in a bid to grow their readership. Want to see what Joey Barton has been posting on Twitter recently? No, neither did we really, but apparently that kind of thing is news so now BBC Football like to cover it…

We’re sorry if the bitterness is a bit hard to swallow but during the transfer window (some might say “silly season”), but we just wanted to get that off of our chests. The window creates a huge amount of buzz and fills up a lot of dead media space – just look at the effort that Sky Sports puts into covering the Deadline Day. And when those massive deals fail to materialise, and all you’ve got left to cover is Ashley Cole’s release from AS Roma, then you’re left a little disheartened.

So why are transfer rumours always so unreliable? There’s a few reasons to this. Firstly, the media don’t care if it’s not true. For them it sells papers, or nowadays it brings visits to their website. Therefore media publishers don’t care if something isn’t true, hence their reputation for printing stories based on little if any real information. This ultimately is a huge factor: the media define what we do and don’t hear, so really it’s up to them.

The next factor is that agents and sometimes players do have agendas to push. Take the case of Sergio Ramos and his very public flirting with Man United just a few weeks ago. At one point it looked like he was mad enough to swap Madrid for Manchester. Then it completely “collapses” and he turns around to sign a mega-contract with Real Madrid. A few things could be going on here; it could be good PR for Man United, making it look like they have the pull to lure stars from Madrid (when it’s always the other way around). It could be Real Madrid using Man United as a pawn to show they’re still a massive force (again more media coverage for Madrid). Finally, it’s very likely that Ramos and his agent wanted to get as much money out of their new deal as possible. This is going to be a common reason for these transfer rumours – agents suggesting their player is interested to their club, in order for the owning club to reward them well or risk losing them.

Finally, and one of the most realistic reasons here, is that many, many times, players are actually on the verge of a big move, only for something to fall through. Take a typical transfer scenario: player tells agent he wants to leave. Agent (with close relation to few journalists) suggests his player could be on his way out of Club X, perhaps to Club Y. Journalist leaks / prints story. Club X and Y discuss terms, and an agreement is made. Owner of club, or manager of club, leaves position (at X or Y) and move fails. In this scenario thankfully nobody looks too bad because it’s quite obvious what happened. But often the details aren’t made public, and so it looks all along that it was a 100% fabricated story on the part of the journalist (who does have a job to do after-all).

There are a lot of other factors that come into play when it comes to transfer failings, including family issues (South American girlfriend doesn’t want to live in Sunderland), player has an image-rights deal that conflicts with his new club, clubs fail to submit transfer document details in time (ahem, Man United or Real Madrid).

At the end of the day there really is more to it than simply blaming the journalist for writing such a made-up story, and hopefully now you’ll understand why it is that so many transfer rumours do end up staying exactly that way – as a rumour.