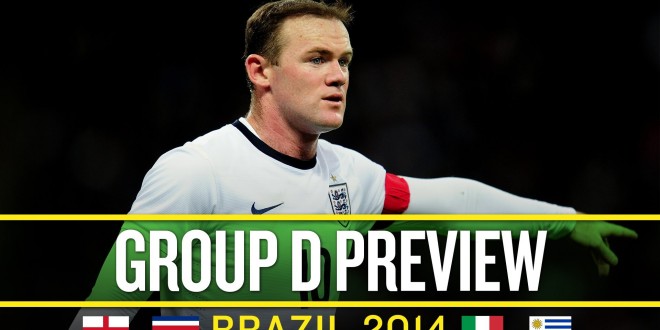 The group previews are coming thick and fast now as the countdown to Brazil vs. Croatia rolls on, and with it, comes footyblog’s preview of Group D: Comprised of Costa Rica, everyone’s favorite underachievers England, Italy, and the mighty Uruguay.

Group D, in similar fashion to Group B, provides a dividing line between the world’s elite sides and those who quite frankly aren’t. Costa Rica come into the tournament in over their heads after making it out of CONCACAF qualifying and really have no shot at advancing, while England, Italy, and Uruguay will all fiercely compete for the 2 spots out of the group stages and into the knockout rounds. Luis Suarez looks set to play a pivotal role in the proceedings as he looks to carry his South American side past perennial underachievers England and a curious Italian side looking to continue the momentum from a strong Euro 2012 showing, although a pre-World Cup draw against Luxembourg can’t help matters too much.

Those expecting Costa Rica to equal their World Cup best Round of 16 performance from Italia ’90 in Brazil shouldn’t hold their breath on it, as Los Ticos find themselves with a daunting task against 3 vastly superior sides in Group D. Managed by Jorge Luis Pinto, this Costa Rican outfit contains a surprising number of European based players (11), although the meat of their side comes from the Costa Rican Primera Division. Led by captain and striker Bryan Ruiz of PSV, this side have balance and experience in all areas of play with veteran defender Michael Umana the rock in defense with 81 Caps. Goalkeeper Keylor Navas of Levante is perhaps the sides’ most well-known player, and he will need to be spectacular in goal if his nation is to get anything from this World Cup. Celso Borges of Swedish club AIK is the main facilitator in the midfield and it is his link-up work alongside Copenhagen’s Christian Bolanos that will energize an otherwise meager Costa Rican attack. At the end of the day though, Costa Rica simply do not have the skill or quality to compete against the likes of Luis Suarez, Andrea Pirlo, Wayne Rooney, and the other stars of Group D, although a valiant effort should be expected from the Latin Americans.

Ahhhh……..The English. So many questions, so much expectation, just how will they fare? Roy Hodgson brings an almost all Premier League 23 to Brazil, with 3rd-choice net minder Fraser Forster of Celtic (Scotland) the lone player in the squad who doesn’t ply his trade in England’s highest division. From the Premier League 22, 8 different teams are represented with Liverpool (5) and Manchester United (4) the leading clubs. Joe Hart of Manchester City remains for the time being the first-choice ‘keeper, at least until he drops a clanger, while the defense in front of him looks shaky and inexperienced, with Glen Johnson the big X-Factor as Phil Jagielka and Leighton Baines should stay the rocks of the back four. The midfield, as so often has been the case over the years, is led by Steven Gerrard and Frank Lampard for perhaps a final time at a major tournament while newcomers Adam Lallana and Raheem Sterling may provide a jolt off the bench. However, up front provides the crucial viewpoint into England’s chances as Wayne Rooney and Daniel Sturridge will HAVE TO rise to the occasion on multiple fronts if England are to advance. Personally, I think England will do themselves justice in Brazil, and by that I mean a decent draw against Italy, a deflating loss to the Uruguayans, and a desperate last day win against Costa Rica that will see them out after 3 games.

The Azzurri are set to bring a mixed bag of experience and youth to Brazil, with 10 of their 23 man squad having played 10 or fewer times for their country while 4 of the remaining 13 have recorded 50+ Caps on the national stage. Cesare Prandelli returns to manage the national side, who put in a good display back at Euro 2012 before being demolished by Spain in the final. Talismanic goalkeeper Gianluigi Buffon is back again to try and stop the world’s best, but he may not have to do so often with Italy’s defense appearing strong thanks to the core group of the Juventus 3 (Andrea Barzagli, Leonardo Bonucci, and Giorgio Chiellini). In midfield, the ageless wonder, Andrea Pirlo returns along with Daniele De Rossi of Roma and fellow Juventus man Claudio Marchisio. The potency of the Italians only becomes more lethal from there, as Mario Balotelli could, key word could, be a revelation again in a striking role and Parma man Antonio Cassano should look to add to his 10 national team goals. A solid defense and quality finishing should see Italy through to the knockout rounds.

Uruguay come into Brazil 2014 with a loaded squad capable of winning the entire tournament, although a large part of their hopes will be pinned upon the play of Liverpool star Luis Suarez. La Celeste’s squad for Brazil is also a very experienced one, with a whopping 13 players recording more than 15 Caps for the national side. Indeed, Uruguay’s frightening attack is also its most experience group, with South Africa 2010 star Diego Forlan returning along with the superb Suarez and the much traveled Edinson Cavani, currently of French champions PSG. Their midfield is also no joke with Diego Perez of Bologna leading the way while Atletico Madrid’s Cristian Rodriguez provides the creative touches and flare. Alvaro Pereira could be a surprise star of the tournament as well with the Sao Paulo midfielder not wanting to disappoint in the country where he plies his trade. Lastly, Uruguay’s defense may actually be their strong suit as the massive Diego Lugano of West Bromwich Albion will anchor the back line in front of veteran ‘keeper Fernando Muslera of Galatasaray. All in all, Uruguay are a very dangerous squad with the potential to claim it all in Brazil like they fatefully did back in 1950.