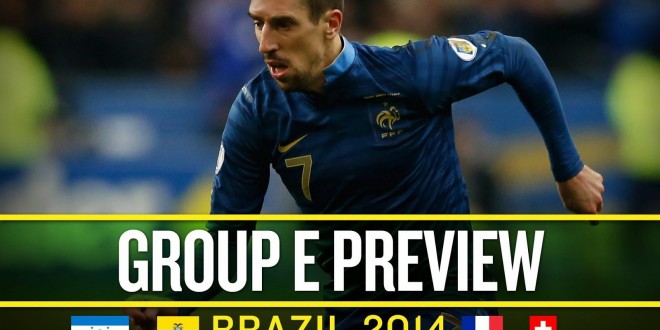 The countdown clock now reads only 2 days until Brazil 2014 gets underway, as we here at footyblog proceed to the second-half of our Group previews with Group E, a group consisting of Ecuador, France, Honduras, and Switzerland.

Group E looks to be the “Group of Redemption” for all 4 nations competing as none of them progressed past the group stages back in South Africa in 2010, while Ecuador did not even qualify for the 2010 World Cup. Switzerland and Honduras are yet again drawn into the same group, as they finished 3rd and 4th respectively in Group H in South Africa, allowing Spain and Chile to progress to the knockout stages. France return to the World Cup following their infamous South African nightmare, collecting only 1 point from a goalless draw with Uruguay while losing to both Mexico and the hosts in a tumultuous 2 week spell that saw a player rebellion undertaken against now disgraced former manager Raymond Domenech. However, Ecuador come in with a clean slate in their first World Cup appearance since 2006, when they surprisingly made the Round of 16 only to be eliminated by England. Indeed, Group E provides an opportunity for all countries involved to move on from their pasts and into their footballing futures in Brazil.

The Ecuadorians bring a balanced 23 man squad to just their 3rd ever World Cup (all this century mind you) with manager Reinaldo Rueda at the helm of La Tricolor. Headlined by Manchester United midfielder and captain Antonio Valencia, Ecuador will have their work cut out for them in Brazil against the stronger midfields of France and Switzerland. Still, fellow midfielder Christian Noboa of Dynamo Moscow should bring added skill to a side that will desperately need attacking creativity against the stiff defenses they will face in Group E. Morelia’s Jefferson Montero and Al-Jazira’s Felipe Caicedo will also need to be clinical in front of opposing nets if the Ecuadorians are to make up for their shaky defense, with Pachuca’s Walter Ayovi set to be the leader in the back alongside new Watford signee Juan Carlos Paredes and the Brazilian-based Frickson Erazo, who plays for Flamengo in Brazil’s Campeonato Brasileiro Série A. Still, the play of Ecuador’s 2 main stars, Valencia and Santa Fe’s Edison Mendez will dictate how their World Cup plays out, and I just can’t see them going very far on just those 2 men alone, as no other player in the Ecuadorian squad can match their talent in the midfield.

The French come into Brazil in fine form, fresh off an 8-0 spanking of Jamaica and poised to make amends for their sins in South Africa. The loss of star midfielder Franck Ribery to a back issue will obviously hamper France’s chances of a deep run in the tournament, but it still shouldn’t deter them too much from claiming the Group E crown. The midfield still features the exploits of PSG duo Yohan Cabaye and Blaise Matuidi, along with the youthful yet sensational Paul Pogba of Juventus, who led France to the U-20 World Cup crown in Turkey back in 2013. While up front, Les Blues can count on Real Madrid’s Karim Benzema for gobs of goals during the tournament. Arsenal‘s Olivier Giroud could also provide Benzema with a solid strike partner for at least the 3 group games while in defense, Tottenham’s Hugo lloris looks to continue his excellent year in goal. The defense itself as well appears solid with Manchester United’s Patrice Evra the commander of the back four, which features an anticipated all Premier League line of Evra, Bacary Sagna of Arsenal, Newcastle’s Mathieu Debuchy, and either Liverpool‘s Mamadou Sakho or Arsenal’s Laurent Koscielny. All this adds up to a very strong French side looking for redemption in Brazil, something I think they’ll find up to a point, although the French are nowhere near capable of taking the tournament without Ribery.

Minnows Honduras will have their hands full in Brazil against 3 other sides who contain more attacking potency and a better defensive line than Los Catrachos. Managed by Luis Fernando Suarez, who coincidentally piloted fellow Group E side Ecuador to their record-best Round of 16 showing in 2006, this Honduran side features an interesting variety of players centered mainly in the United States, United Kingdom, and right at home in Honduras. Captain and leading Cap getter Noel Valladares will need the tournament of his life in goal if he and his country are to have any hope of advancing, while the goal poaching will have to be undertaken by Real Espana’s (Honduras) Carlo Costly and Jerry Bengtson of the New England Revolution. In the midfield, Wigan Athletic’s Roger Espinoza will be crucial along with Stoke City’s Wilson Palacios if Honduras are to gain any sizeable share of possession during matches against clearly superior ball-controlling sides like the French and Swiss. A pair of MLS-based mids may also be called into action by Suarez in the form of Chivas’ Marvin Chavez and Houston Dynamo’s Oscar Garcia, while Hull City’s Maynor Figueroa and Celtic’s Emilio Izaguirre provide the muscle of the Honduran defense. Overall, the Latin Americans are not a bad side by any stretch of the imagination, but it would be a stretch to see them advancing from this group.

This Swiss side are a quality group poised to combine all of their cohesion into a decent run come a few days time. Led again by manager Ottmar Hitzfeld, the Swiss are looking to equal their Cinderella run from 2006, when they reached and were eliminated in the Round of 16 by Ukraine despite never conceding a goal in the competition from the run of play , bowing out after penalty kicks. That famed “Swiss-Army Knife Defense” that held their own as well in 2010 is poised to return here in 2014, with Juventus’ Stephan Lichtsteiner and Valencia’s Philippe Senderos set to dominate the back line ahead of VFL Wolfsburg ‘keeper Diego Benaglio. This Swiss side will become known for their midfield rather than their defense however, as a bevy of talent like Napoli’s Valon Behrami, Blerim Dzemaili, and Gokhan Inler are set to star alongside Bayern Munich youngster Xherdan Shaqiri and Eintracht Frankfurt’s Tranquillo Barnetta. That leaves the forwards spots as the weakness of the side, and with an average age of 22.5, the 4 young-uns selected for the task (Haris Seferovic, Mario Gavranovic, Admir Mehmedi, and Josip Drmic) will need to improve on their combined 50 Cap – 9 goal output. Assuming the Swiss can get something from their strikers, and their defense holds strong again, they should manage to get past the rest of Group E.