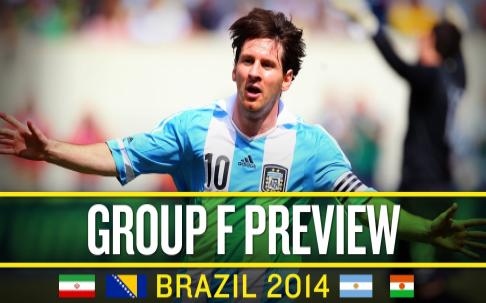 Only 1 MORE DAY football fans until the 2014 World Cup kicks off in Brazil, and in last day prep for the big tournament, footyblog presents you with our final 3 group previews, starting with Group F and Argentina, Bosnia-Herzegovina, Iran, and Nigeria.

Group F features a medley of interesting stories coming together from each of the 4 nations involved in the group, headlined by Argentina and their title hopes behind world-class midfielder Leo Messi. The South Americans are eager to claim their first World Cup since 1986 on their home continent and with their stacked lineup, it would be hard to make a case against them. In addition to the Argentinians, the Bosnians provide a truly compelling story as they enter their first ever World Cup finals amidst a backdrop of tragedy as floods have crippled the small Balkan country. Iran also have hopes of a fairytale run in Brazil behind former Real Madrid manager Carlos Queiroz, while Nigeria will look to carry on its momentum from their 2013 ACON (African Cup of Nations) victory over Burkina Faso. Each team in Group F has something to prove, and it should prove to be entertaining viewing in Brazil.

Lionel Messi and Argentina ride into Brazil on their high horses as one of the betting favorites to nick the title away from Spain, and why not? With a loaded front line consisting of the great Messi, Real Madrid’s Angel di Maria, Manchester City’s Sergio Aguero, and Napoli’s Gonzalo Higuain, the opposing defenses of Group F should be quivering in fear at the prospect of facing this lethal lineup. And Argentina’s strength doesn’t stop there, as they also have a solid defense consisting of Monaco goalkeeper Sergio Romero, the Manchester City pair of Martin Demichelis and Pablo Zabaleta, and Napoli man Federico Fernandez. While not incredibly talented, this Argentinian defense should be enough to hold down the fort while Messi and company do their damage at the other end. And furthermore, Argentina’s midfield should also dominate the field of play against all of their Group F opponents with Barcelona‘s Javier Mascherano and the Argentinian-based (Newell’s Old Boys) Maxi Rodriguez set to run the show for Argentina, who will be a force to be reckoned with in group play.

Now, if there’s going to be a heartfelt story to come out of Brazil 2014, then it will be the story of Bosnia-Herzegovina (from now on referred to as BH). A part of the former Yugoslavia, BH is competing in their first-ever major competition following near misses in both World Cup and European Championship qualification in recent years. Independent since 1992 and crippled by the Bosnian War until 1995, BH recently fell yet again on hard times following a series of catastrophic floods reported to be the worst in the region’s 120 year record-keeping history. However, amongst all this turmoil and tragedy, football has again found away to serve as a healing of sorts for the people of BH as the national team’s rise to prominence has infused unity and pride into an area previously known for neither. Led by captain and Bayer Leverkusen defender Emir Spahic, the Bosnians will look to continue their historic World Cup debut into the knockout stages, although aside from Spahic, their defense is extremely green with SC Freiburg man Mensur Mujdza the next most veteran defender at only 22 Caps, perhaps forcing Stoke City goalkeeper Asmir Begovic into a role of incredible importance for his side. Fortunately for BH, their squad only improves from there as the midfield is dominated by both Roma man Miralem Pjanic and career BH Cap leader Zvjezdan Misimovi?. As far as strikers go, BH have one of the best in the business in the form of Manchester City’s Edin Dzeko, and Dzeko will have to be on form in Brazil as BH manager Safet Susic elected only to take 3 forwards to the World Cup. Regardless, BH have all the makings of a World Cup success story come a few days time, and I believe its more than just a hopeful one for the people of BH.

Iran enter their 4th ever World Cup with hopes of advancing past the group stages for the first time ever, with manager Carlos Queiroz pumping his players full of confidence prior to their opening match against Nigeria. Captained by Al-Kuwait’s Javad Nekounam (140 Caps), the Iranians have a 23 man squad bolstered mainly by players from Middle Eastern leagues who will be of new viewing to many of the fans watching the proceedings in Brazil. For starters, whoever Queiroz chooses as his starting ‘keeper will have to adjust quickly to the job as of the three ‘keepers on the roster, the most experienced (Rahman Ahmadi) has only 10 Caps for Team Melli. In defense, Persepolis (Iran) man Jalal Hosseini will provide experience (85 Caps) in an otherwise old yet inexperienced back four that features an average age of 29 and an average Cap amount of just 16 aside from Hosseini. Due to this weakness in defense, it will be up to Iran’s midfield to provide them with a scoring edge in Brazil, perhaps lofty expectations for a midfield consisting of only 5 goal scorers out of the 9 players selected. Nonetheless, the veteran Nekounam will look to create alongside Fulham’s Ashkan Dejagah and Masoud Shojaei of Spanish side Las Palmas, while strikers Karim Ansarifard of Persepolis and Reza Ghoochannejhad of Charlton Atheltic will need to poach more than a few fortunate goals if Iran are to keep up the scoring pace with their Group F compatriots. Unfortunately, that is something I just can’t see them doing as a decent-at-best offense coupled with a really poor and untested defense should be the undoing of Iran in Brazil.

On paper, Nigeria look a very nice squad. Vincent Enyeama of Lille in goal. Efe Ambrose of Celtic and Norwich City’s Joseph Yobo in defense. The ageless John Obi Mikel of Chelsea and former Chelsea man Victor Moses in the midfield. And lastly, Fenerbahce’s Emmanuel Emenike and Stoke City’s Peter Odemwingie up front. A pretty decent collection of players, no? There’s only one slight problem though, they all CAN’T PLAY WORTH A DAMN TOGETHER! (yes, I went ALL CAPS on them) This team look NOTHING like the side that claimed the 2013 ACON as they have failed to win a single pre-World Cup friendly in 4 attempts and have only mustered a weak 3 goals in those matches, with 1 being a penalty kick and 1 other being a wicked deflection against Scotland. In fact, Nigeria have looked downright awful in some of their friendlies, playing out poorly contested 0-0 draws against both Mexico and Greece while needing a 90+ minute goal to avoid defeat against the Scots and succumbing 2-1 to the United States back on Saturday, a game which I watched the entirety of and can say that Nigeria in no way deserved their one goal. They appeared sluggish, deprived of ideas in the attacking third, and seemingly let the United States roam with abandon towards the goal of Enyeama, who has been the only bright spot to this Nigerian side of late. To be frank, Nigeria are in a massive funk at the moment and one normally doesn’t request to face Lionel Messi and Argentina when their side is in said funk. That, paired with a BH side that can flat-out finish should be enough to do in a disappointing Nigerian campaign in Brazil.