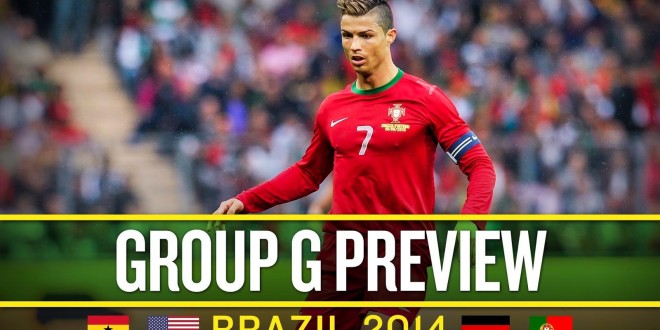 Our penultimate group preview here at footyblog takes us finally to the Group of Death, featuring 4 sides each very capable of advancing in the forms of Germany, Ghana, Portugal, and the United States.

Group G is considered the “Group of Death” of the 2014 World Cup, comprised of 4 sides who all made it to the knockout stages in South Africa and who have a median FIFA World Ranking of 14, not too shabby at all. Despite this group’s competitive nature, each of the 4 nations involved holds belief that they have a true chance at escaping this horror draw. For Germany, the anticipated class of the group, things have gotten a bit more nervy over the past couple days as star midfielder Marco Reus has been ruled out due to a foot injury sustained in a pre-World Cup friendly against Armenia, although the Germans are still more than fancied to get out of the group. Ghana meanwhile will look to continue their record as one of Africa’s most consistent and dependable World Cup teams despite their crushing 2010 exit, while Portugal will look to ride star man Cristiano Ronaldo into the knockout rounds. Lastly, the United States and their German manager Jurgen Klinsmann will attempt to pull one of the shocks of the tournament and advance from a group that contains 2 apparently superior sides in Germany and Portugal along with Ghana, the side that has sent the US packing from each of the last 2 World Cups. Group G is chock full of hope and talent, and should prove to be possibly the most entertaining group to follow in Brazil.

The much talked about Germans are led by manager Joachim Low for a second consecutive World Cup and will look to continue their current run of dominance, despite their early exit back at Euro 2012 in the semifinals. Captained by Bayern Munich defender Philipp Lahm, the Germans bring an exceptionally strong squad to Brazil that is solid from back to front, with Bayern Munich net minder Manuel Neuer the rock of the squad. Ahead of Neuer, Arsenal‘s Per Mertesacker will look to combine with Lahm to form a near un-penetrable defense while the midfield will be run by yet another Bayern Munich man, Bastian Schweinsteiger, in the wake of Reus’ unexpected absence. It’s not all bad news for German fans though, as Reus’ injury may allow for the Munich pair of Toni Kroos and Mario Gotze to enjoy more time on the field in Brazil, a nightmare proposition for any opposing defense. Striker-wise, Low has elected to yet again use 36 year-old Lazio man Miroslav Klose to break down the opposition, with Klose’s 132 Caps the most out of any player in this German squad. In addition to the German all-time leader scorer (69 goals), Low has chosen Bayern’s Thomas Muller to compliment him as Muller’s large stature (6ft 1in) should prove fruitful from corners and free kicks. Overall, the Germans are a well-rounded squad despite Reus’ injury and should still take care of business with regard to the Group of Death, although a title run may be a little too far out of their reach.

Ghana enter their 3rd World Cup looking to break new ground in the competition and better their Quarterfinal showing from 2010, which followed an impressive Round of 16 performance in their first ever WC-Finals in 2006. Not necessarily a team of big names, Ghana are headlined by AC Milan midfielders Michael Essien and Sulley Muntari, both of them recipients of over 55 international Caps. Aside from the pair however, the Ghanaians bring a largely inexperienced side to the 2014 World Cup, in fact, they have on average the tournament’s youngest side with an average age of just 24.9 years. Especially in defense, Ghana may experience some crucial growing pains during the tournament as Dnipro’s (UKR) Samuel Inkoom brings only 46 Caps to the table as his country’s most experienced defender. Potentially even more troublesome for Ghana will be their goalkeeper situation, with current first-choice Adam Kwarasey of Norwegian side Strømsgodset IF only having 21 Caps under his belt. In the midfield, Essein and Muntari will look to carry Ghana alongside Juventus’ Kwadwo Asamoah and Schalke 04 superstar Kevin-Prince Boateng, who will have to breakout at this tournament if Ghana are to advance. Up front, Marseille’s Jordan Ayew and talismanic Al-Ain striker Asamoah Gyan will need to combine early and often against the rest of Group G for Ghana to have enough to overcome their seemingly poor defense. It would be a massive ask for the two of them to score enough to give Ghana much hope, and the awful group draw should doom Ghana right from the off. Alright….. Let’s be very direct here. I will either be very right about this, or oh so very wrong. I have Portugal out in the group stage because I believe Cristiano Ronaldo will be the only bright spot for the Portuguese, and that he alone will not be enough to carry them into the next round. For starters, their goalkeeper situation is not one of extreme security with current first-string man Eduardo of Braga only having 31 Caps to his name and not appearing too solid in pre-World Cup friendlies. In the defense, Pepe and Bruno Alves represent the only 2 solid defenders in the squad, and even at that, Pepe is known to be a bit of a loose cannon and could easily let his temper slip during a group match. Pepe’s Real Madrid buddy Fabio Coentrao may have to step-up in a big way this tournament if the Portuguese defense are to not slip to mush during these 3 group matches. Midfield wise, Nani of Manchester United should star alongside Fenerbahce’s Raul Meireles in making sure that the football finds its way to Ronaldo, an integral part of Portugal’s attack. Nani himself will need to serve as the leader of the midfield and his failure to take charge in the middle could spell the end of Portugal. Lastly for the forwards, with Ronaldo pretty much on his own unless Lazio’s Helder Postiga can provide some offensive punch. While this squad may look okay in name, I think their defense will let them down big time and Ronaldo alone won’t carry Portugal past their poor defense and into the next round, in a shocking upset.

Considered the underdogs of the group, the United States’ hopes of advancing hinges entirely on an opening game win over Ghana. A draw or loss will more than likely end Jurgen Kilnsmann’s side’s chances of advancing right then and there, but if the US can nick a solid, confident opening win against the Africans, it could breathe life and energy into a camp that already has a solid amount of both. Captained by Clint Dempsey and surprisingly without the services of fan-favorite Landon Donovan, this US side contains lots of youth mixed in with experience, especially in defense, where DaMarcus Beasley and his 116 Caps will be paired alongside the other 7 selected defenders and their combined 107 Caps. Goalkeeper Tim Howard of Everton is quite capable of playing the role of hero on multiple occasions though, and the veteran with exactly 100 Caps should be prime for a splendid Summer in Brazil. The midfield and attack thus remain as the US’s biggest questions, but the emergence of Michael Bradley as a dominant presence in the middle of the park should aid the US in their quest to attain a decent share of the possession. Sporting Kansas City’s Graham Zusi will be the X-factor for the US as the MLS-based player will need to improve his physicality against the rest of Group G if the US are to have a true shot at advancing, while Jozy Altidore finally found his scoring touch again against Nigeria by grabbing a brace and should be ready to go in Brazil alongside Clint Dempsey and San Jose Earthquakes’ Chris Wondolowski. Again, the hopes of the United States to advance hinges solely on their first game performance, but if that can be a victorious one, then you should fancy the US’s chances to sneak into the knockout stages.