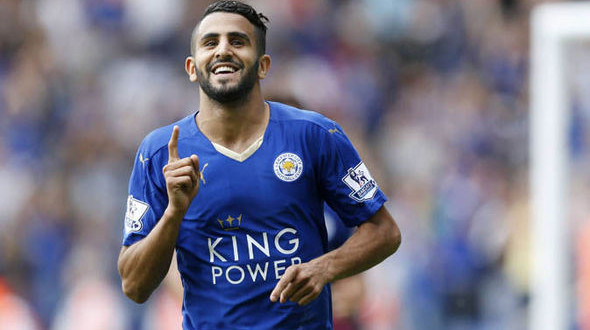 FC Barcelona interested in the revelation of the Premier League: Riyad Mahrez

The goal that led to a suffering victory of Leicester City over Watford (0-1) was enough convincing for Luis Enrique to see him fitting in the best team of the world: Riyad Mahrez.
According to The Sun, Luis Enrique was so amazed with his last performances with his team Leicester City, leader of the Premier League, that he asked his bosses to make the Algerian star “a priority” over Marco Reus, Borussia Dortmund forward and former champion with Germany last World Cup.
The Sun claims Barcelona would sign the Leicester City winger for 15 million Pounds -about 20 millions Euros- this summer. However, his contract with the Foxes end in 2019. It is not the only time Barcelona was interested in the 25-year-old promising star.
The former Le Havre winger was signed by Leicester for half a million Euros in 2014. Teams such as Arsenal and Chelsea were interested in signing him but Leicester did not want him to be transferred. However, as an admirer of Messi, it seems Mahrez showed some interest in playing with bigger teams than player in any other team in UK. Real Madrid also showed some interest, but because of its institutional chaos and poor performance at La Liga, Mahrez would reconsider playing for the “azulgranas,” but not this summer. In fact, 51.4% of 1711 voters at Bleacher Report UK said he’s not moving this summer yet, but later.
Besides his unexpectedly great exhibitions with Leicester, there is a little chance he could oust Messi, Neymar or Suarez, but as a backup player. It’s convinced they will surely be playing for the UEFA Champions League, and he might know the team needs him to make more history to their actual history. Even his style of play is suitable for Luis Enrique’s philosophy, it might be a risky purchase depending if he maintains the same form he has actually. But only his heart knows best if he still is loved by his fans or loves playing for Barcelona.
His great season with the Foxes, including the one last Saturday, has made him not only the best player of the season, according to Bleacher Report UK, but also one of the players with major transcendence in European football, a footballer to see and follow. Only time will tell. Meanwhile, let’s enjoy how him along with Vardy, will make history for Leicester City in the most passionate season so far in the -already proven- most exciting league of the World.