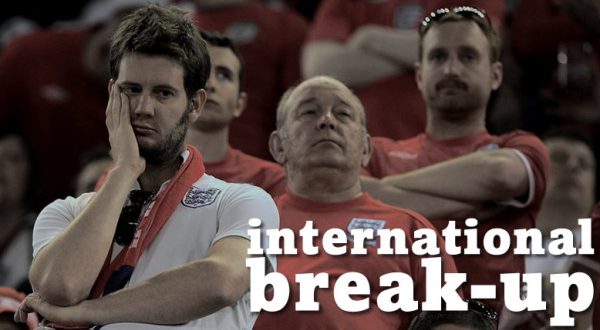 With another international break and interruption to club football behind us, is there any football fan who welcomed the tedious England games or a riveting Slovenia v Slovakia friendly?! Word is, everyone is breathing a sigh of relief that club football (and decent football worth watching) is now back. So why not end the international breaks and put fans, and more importantly, players out of their misery?

English football’s fixture programme is already congested, as there is no winter break like on the continent. Despite this, three or four breaks from club football to play England matches are thrust into the season, most games are largely pointless friendlies or dreary tournament qualifiers adding to a jammed packed programme and jeopardising more important games at club level.

The return of the Premier League was very much welcomed last weekend but it felt like the break had had a stuttering impact on some teams and matches, one being Liverpool v Manchester United. Billed as the game of the season, the build up to the match a week long feature on Sky Sports news, yet did it really live up to expectations? Surely the break played a part in this usual fiery, action packed match? Some players looked jaded, which given that Philippe Coutinho and Roberto Firmino were in the Brazil squad on Wednesday night and Antonio Valencia was with the Ecuador team, it is no surprise. Also, neither of these players would have trained with their clubs until Friday, how can these footballers have prepared sufficiently for such a high profile match on the Saturday? Both of the Liverpool attackers were taken off with still twenty to fifteen minutes to play despite being two of the club’s best players. This was probably due to the fact they played mid-week as neither were playing badly on Saturday, meaning viewers of the match missed out on watching a full ninety minutes of the Premier League’s best and, more importantly, it decreased the talent available for the team and perhaps a winning goal.

For United, three important players were injured while playing for their countries over the last two weeks. Rashford made the bench despite picking up a knock in the England games, Bailly wasn’t even named as a substitute, presumably his injury more severe. However, the most frustrating of all was Marouane Fellaini being ruled out for several weeks with a knee problem while playing for Belgium. Can’t international mangers not use some common sense or liaise with club managers as to resting footballers or only playing them for half a match? Roberto Martinez, the Belgium manager, played Fellaini against Bosnia-Herzegovina during the international break – a meaningless World Cup qualifier as Belgium have already qualified for the tournament, so why play a valuable club player? It is understandable an international manger wants to win every match as does a club coach, especially in the modern era of frequent managerial sackings, but doesn’t logic come into it? Sadio Mane has suffered the same fate, as well as Kante playing for France – two vital players for Liverpool and Chelsea who will miss critical club football but will most probably be fit for their country when the next tedious international break occurs. Unfair or unfortunate?

Some will argue players pull out of games for their country due to dubious injuries however, it is the club that pays their wages and if more logic was applied to the timing of international matches and managers were more sensible in their team selections when a Fellaini situation arises, maybe these sudden ‘injuries’ could be avoided…

Despite all of the above negatives, there does seem a smidgen of advantage to the international break – just ask Crystal Palace. The Eagles beat Chelsea 2-1 last weekend after the international break, coincidence? Hodgson magic? Or did a two week gap in their so far dismal league campaign do Roy’s men a favour? After all, the break didn’t aid The Blues one bit, losing Kante as already mentioned and having half their squad away with their respective countries, whereas The Eagles didn’t have either of these problems so you could argue it was the best time to play a top club and get a result.

So what is the answer to these breaks in the thrill of the Premier League programme and having to endure two weeks of tedium that all football fans seem to hate? Why not have a month dedicated to international training/matches at the end of the domestic season? This happens when there is a tournament like the World Cup taking place so why not do this every post-season? Perhaps shorter breaks from club football just for international training? At least this way we won’t have to put up with boring matches that seem completely unnecessary – does England playing Australia or Turkey in a friendly really help The Three Lion’s team? From most of their displays on the pitch, I would say not.

Whether the international break continues or not, it is increasingly obvious that it doesn’t seem to help anyone (apart from Crystal Palace!) but seriously, injuries at vital times, players travelling half way across the world for pointless friendlies, boring viewing, it is about time we had a break from the international break or break it up altogether.