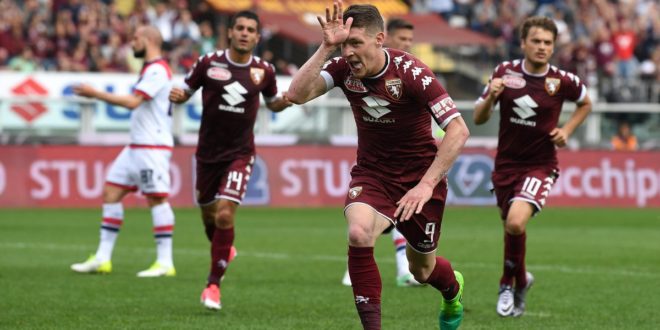 Juventus have been the outstanding team in Serie A this season again and the title looks like it will be in the hands of The Old Lady once more as we head towards the end of the season. Their players will be praised and rightly so, no doubt they will pick up individual awards, Gonzalo Higuain has scored a fantastic 21 goals and sits third in the top scorer’s chart at present. He will be looking for the ‘golden boot’ trophy come May, however, only 12 miles away from the Juventus arena, Torino, who often play second fiddle to their city rivals, and away from titles, records and the dizzy heights of European football, have one of the hottest properties in Serie A in a player who sits top of the goal scoring charts.

Andrea Belotti has been in fantastic form for Torino this season. The striker, who the Turin team bought in 2015 from Palermo, has hit a magnificent 25 goals for his club at present, which is an excellent return when playing in a more defensive minded league like Serie A as well it being impressive to achieve such heights as a striker for a mid-table team. Tornio’s match on Sunday against Cortone saw Belotti break an incredible record, he became the first player for the club to score 25 goals in 67 years. The last player was Benjamin Santo. This latest record has surely upped the Italian’s market value to a phenomenal figure compared to the 7.5 million Euros Torino paid Palermo only 19 months ago.

As well as his fantastic goals, the Torino front man’s all-around play has captured the imagination this season. Belotti, or ‘The Rooster,’ a nickname given to him as a boy due to his goal celebration where he imitates the bird’s comb with his hand to his head, has grabbed three hat-tricks for Torino on his way to his 25-goal tally, as well as supplying his team mates with five assists. His importance and brilliance this season is there for all to see and the fact that he has only been substituted once in 28 appearances shows what an asset he is to the Turin club. With his transfer value having multiplied six times over in the space of two years, can the Italian club keep hold of their star striker or even afford too?

‘The Rooster’ would seemingly slot perfectly into any top European side. He is extremely mobile and a fighter of the ball – making the Premier League an ideal destination for him. He also has great technique, and of course he has fantastic ability to hit the back of the net.

Torino are desperate to keep hold of Belotti but with a rumoured bid from Arsenal for £56million and a host of clubs apparently interested in the Italian, it is going to be hard for the club to resist. The head coach of the Italian side has already confirmed this week that they cannot afford to buy Man City goalkeeper Joe Hart on a permanent deal so over £50million from the sale of Belotti would be a massive coup for a team struggling financially in a league where money can be hard to come by.

The club and transfer fees aside, the player himself will surely be lured by a big money move and the chance to prove himself on a big stage as well as in European competition. Torino currently sit in ninth place in Serie A, a great achievement for a club who were declared bankrupt in 2005, but with all the loyalty in the world, it is doubtful ‘The Rooster’ will want to battle it out again next season for a mid-table finish when he could be playing for a Premier League or La Liga title as well as possibly competing in the Champion’s League.

Andrea Betotti will undoubtingly add to his extraordinary goal scoring tally before the end of the season and he may well end up winning the ‘Capocannoniere’ – the Serie A golden boot, which would be much deserved. However, less certain is his future and speculation will continue throughout the summer as to where he will play his football next season. Whatever happens in the transfer market concerning this super striker there is no doubt, ‘The Rooster’ has been remarkable in Serie A this season and Premier League fans could well be seeing more of him should a big money deal bring him to England this summer.