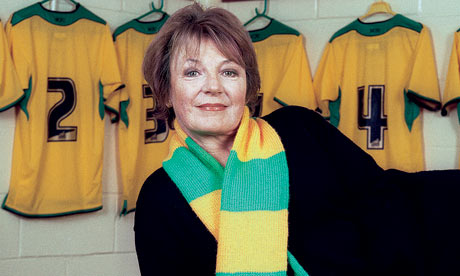 It is nine years ago today that Norwich City’s majority shareholder Delia Smith surged onto the pitch at half time during the clubs Premier League match against Manchester City.

The score was 2-2 at half time with two goals from Antoine Sibierksi and Robbie Fowler cancelling out the two goal early lead given to the Norfolk club by Leon Mckenzie and Dean Ashton.

Delia came onto the pitch to rally her fans, deflated  by the collapse, but it was to no avail as Mattais Jonsson was sent off for the Canaries and Robbie Fowler went on the grab his second, and what turned out to be the winner.

The Canaries, despite an upturn in form, went on to be relegated.

The moment, captured by the Sky Sports cameras, will forever be remembered by Norwich, and football fans, alike as it appeared that Delia had drunken one too many glasses of wine.

The Youtube video has over 600,000 views and has been voted the 5th most iconic Premier League moment ever by the BBC.