Home » News » 25 Years of the Premier League – The Greatest Matches 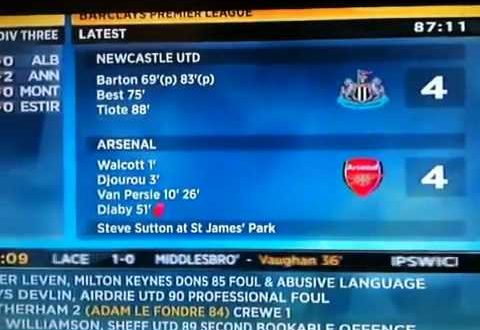 25 Years of the Premier League – The Greatest Matches

It is 25 years since the Premier League was formed and England’s top football tier went into its 26th season last weekend with some great matches. A seven-goal thriller on Friday night at The Emirates stadium saw Arsenal run out 4-3 winners, a last-minute equaliser in the Saturday lunchtime kick-off gave Watford a 3-3 draw against Liverpool – both matches made great viewing and were thrilling to the end showing how exciting the Premier League is and that classic exhilarating matches are what makes England’s top league the best in the world.

On the back of the Premier League’s milestone and the gripping games on the opening weekend of the 2017/18 season, now seems like an ideal time to look back at some of the greatest games played in the Premier League. Fans of the English game have become accustomed to exciting fast paced matches with goals scored, the attacking play in the Premier League is like no other league in the world, but with over 19,000 games played, which matches are the best ever witnessed? There are many to choose from and every fan will have their preference, so let’s take a look at the best games and the all-time Premier League top five…

This sensational match was a must win for Newcastle. Their title hopes were hanging in the balance after squandering a 12-point lead at the top of the table to Manchester United. Starting the game as the better side, Robbie Fowler put the Merseyside club ahead before Les Ferdinand equalised. Four minutes after The Magpies had levelled, their title hopes were revived when David Ginola put them ahead. Another Fowler goal, an Asprilla strike and a Collymore shot hitting the back of the net, this thrilling match was poised at 3-3 and a fantastic spectacle – more so for the neutral, if you were a Newcastle fan or their manager it was torture. Kevin Keegan hung his head in despair when Collymore won the match for Liverpool in stoppage time and effectively ended his and The Toon’s dream of a first ever Premier League title. Good build up play saw the striker score his second of the match giving Liverpool a famous win and the Premier League one of the greatest and most entertaining games in its 25 year history.

This incredible match is one of the best football derbies of all time if not the greatest Premier League game in the history of the competition. A breath-taking 97th minute winner capped this super match, Michael Owen gabbing the goal making him forever an Old Trafford hero. United had taken the lead three times through a Rooney goal and Darren Fletcher brace, however, City fought back each time and thought they had snatched a draw when Craig Bellamy hit the back of the net in the 90th minute. With The Sky Blues then manager and former United great Mark Hughes remonstrating on the touchline over the amount of time added on at the end of the match, to make this game even more stunning, a former Liverpool player became the star of the red side of Manchester, drilling his late winner into the net, cue crazy Old Trafford celebrations, a livid ‘noisy neighbour’ manager and a Premier League match that would go down as one of the most memorable and supreme.

This attacking end to end match was a classic and sensational spectacle. Not only is it one of the best London derbies of all time it could easily go down as the greatest Premier League match in the history of England’s top division. Spurs went ahead with a superb volleyed strike from Noureddine Naybet but Henry made it 1-1 before Arsenal took the lead through a Lauren penalty. Vieira increased The Gunners advantage on 60 minutes, before Defoe grabbed a goal back for the home team, 2-3. Ljungberg netted a fourth for Arsenal, King pulled another back for Spurs before Robert Pires made it 5-3. Kanoute’s strike gave The White Hart Lane club hope, but the incredible 5-4 score line stayed that way until the final whistle creating a non-stop, pulsating, amazing match to challenge any given list of greatest games. Both teams provided thrilling entertainment and a never-say-die attitude, battling it out right up to the 90th minute – everything you would want from a timeless fixture.

A sensational eight goal fest in this staggering match makes it a top contender for the Premier League’s greatest game, a game that saw Wenger’s men go 4-0 up and seemingly cruising to victory. Van Persie grabbed a double, Walcott and Djourou scored one each, it was a case of just how many goals could The Gunner’s grab in this match? The score line could have doubled by the final whistle – which would still have made this match a candidate for the best ever Premier League game, but amazingly, it was a Newcastle comeback that propelled this match into the all-time top five greatest contests. An Arsenal sending off changed this game in the second half and The Magpies took full advantage of The Gunner’s collapse. Leon Best netted, before two Joey Barton penalties saw the game on a knife-edge. The comeback was complete when Tiote volleyed a super strike into the net to stun Arsenal and fans alike and make this match one of the Premier League’s finest spectacles ever.

An embarrassing afternoon for Arsenal at Old Trafford but a fantastic 90 minutes for United fans and any neutral looking for a goal-fest game and a sensational score-line. It was Arsenal’s worst defeat since 1896, but one of Manchester United’s and the Premier League’s finest matches in which Wayne Rooney grabbed a hat-trick, Ashley Young scored two wonder goals, while Welbeck, Nani and Park Ji-Sung also got in on the act with a goal each. Despite being swept aside and being hit by injuries, Arsenal did manage to find the back of the net twice through Walcott and Van Persie, but the damage had already been done by a team on the rampage. Ten goals, super strikes and amazing attacking play, despite being a relatively one-sided affair this match cannot be discounted as one of the finest played in England’s top league. A sad day for Wenger and his club but another classic game to add to the list of greatest Premier League matches.

It would be hard to pick an overall winner from the above matches, but you would have to agree, all five are classic, thrilling games that will always be remembered as some of the greatest in the history of the Premier League. Everyone will have their favourite match, but whatever your view is on the best game ever, no can argue with the fact that the Premier League provides exciting entertainment week in, week out, and electrifying matches are always on the cards when watching England’s top football division. The Premier League’s ‘greatest matches list’ is growing all the time and judging by the start of this season, there are more exhilarating games to come…